Foymount is well known for it’s abandoned Radar base that was developed in the 1950’s during the Cold War to detect unwanted incoming Soviet aircraft. During a 2 day exploration near Renfrew ON Chris and I decided we’d also check it out to see what we’d find. There was no entry points in any of the buildings that we could find but our efforts got cut short by someone living in one of, what we thought, were abandoned barracks across the road.  He was very unhappy about our presence and informed us that the owner has had people charged in the past for disobeying the “No Trespassing” signs.

For the short amount of time we were able to walk around we noticed different pictures of the Arch Angels and other religious symbols posted on all the windows and every door. At first we were a little thrown back by this….thought maybe there was some sort of cult that was using these decrepit old apartments. I even remember looking in one window and thought how it looked as though someone was actually living in it! There was stained glass ornaments hanging in the window, furniture and curtains. But how could that be?? I can’t imagine any parts of these apartments would be considered safe by any stretch of the imagination. The gentleman that asked us to leave gave us a little info before we were on our way but I’m not convinced he cleared anything up in our heads LOL!

When I said it looked as though people were inhabiting 1 or 2 of the ground level apartments he expressed some annoyance and informed us that there is. In his words “It’s people like you that post these things on the intranet that make people think it’s abandoned!” And although he said someone was living in it….he also followed that by saying trespassers have come in and ripped out the copper piping etc.. So….how on earth could it be liveable let alone safe I wondered. Didn’t matter anyway I guess….I did tell him I would blog about our experience and let others know that this is not entirely abandoned so others wouldn’t be an annoyance.

He also informed us that the old apartments now belonged to a religious group which would explain all the things on the windows and doors but, I still thought it was a little overkill 😉 The owner lives a couple doors down and has a no tolerance policy. He is serious and will have people charged if they continue to ignore the signs. While we were lucky others certainly may not be so before you decide to make the drive to Foymount remember you’ll be photographing these buildings from the road. 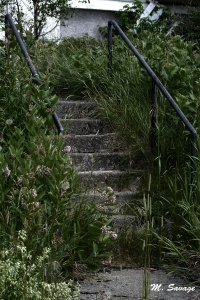 There is lots of documented history on Foymount and I couldn’t tell you anything new other then the state of it now. If you’d like to read about the Radar base visit https://en.wikipedia.org/wiki/CFS_Foymount . Thanks again for reading and If you liked our blog please let us know 🙂

2 thoughts on “Foymount Radar Base – Off Our Radar!”

This site uses Akismet to reduce spam. Learn how your comment data is processed.